The Pattern Language approach was invented in the early 1970s by an architect and theorist - Christopher Alexander. The approach has been widely adopted in a range of fields, and consequently there are a huge range of references [1, 2, 3]. Nevertheless, I'm going to write my own introduction to Pattern Languages here, for three reasons; one, I can't find any that fit my purpose, two, I will focus on the use of Pattern Languages as tools for addressing formally complex systems, and three, having studied with Chris. Alexander and used Pattern Languages over 30 years in my work as an architect, I have a fairly deep understanding. This is going to begin as a fairly formal description, which will hopefully get more entertaining as you follow links towards more detailed aspects. [This is very much WIP at the moment]

A single-sentence description of a Pattern Language is a hard thing to write, but here's my attempt:

A Pattern Language is a 'mapping' of a complex system as a loosely-bounded network of identifiable, recurring conditions (Patterns), carefully documented: non-reductive in character, with hierarchy of scope, rather than hierarchy of fundamentality, which captures the relationships between and essential characteristics of these conditions in a way which enables effective human engagement. 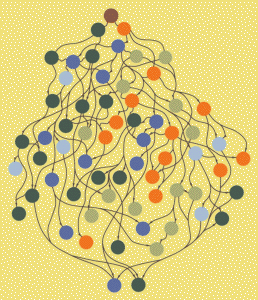 Let's unpack that mouthful a little: